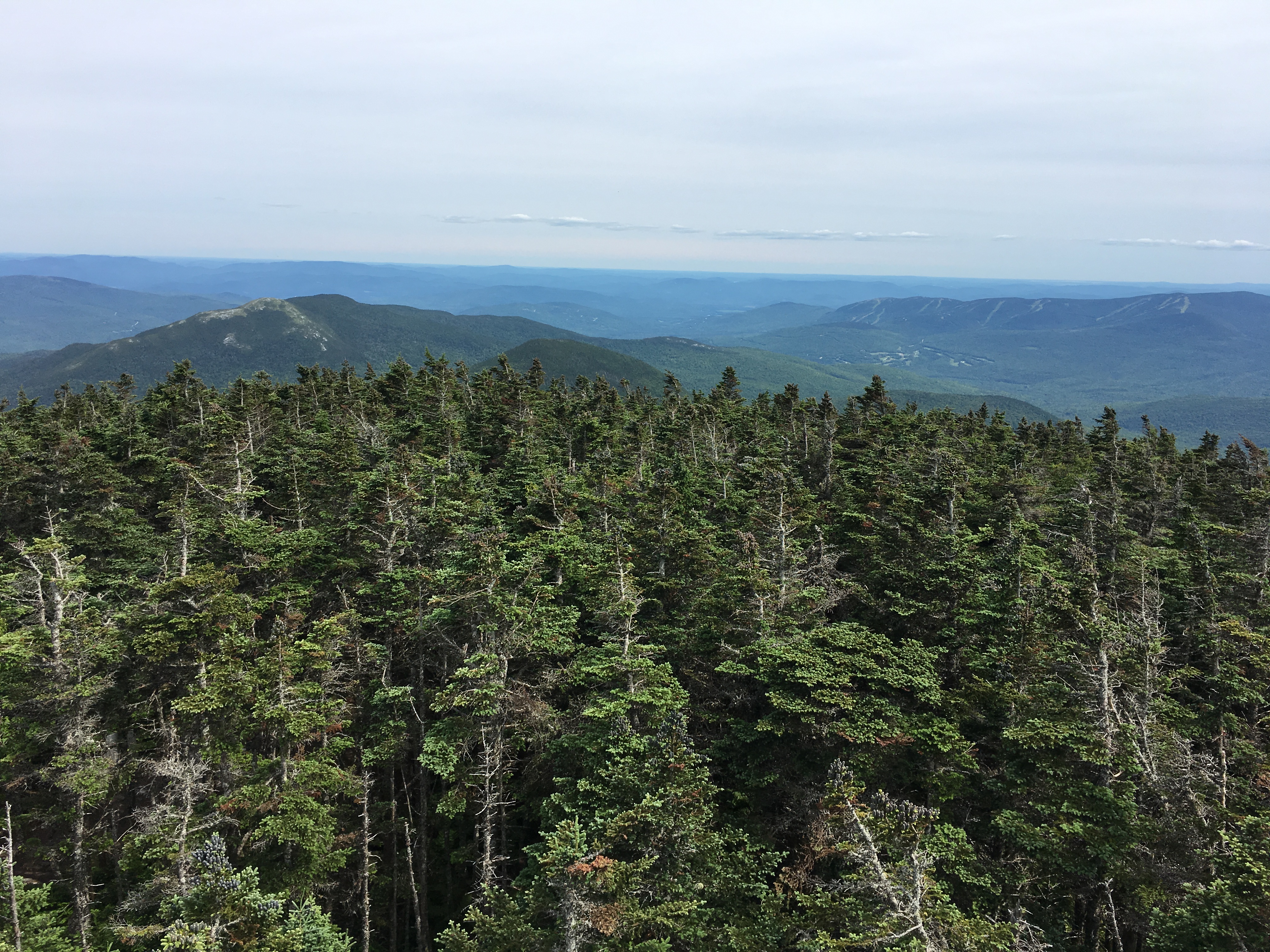 Views for days from the summit of Old Speck in Maine.

Summer in New England offers some of the best hiking in North America and, if Mother Nature grants us enough sunny weekends, the opportunity to tackle the 67 tallest peaks in the region. This is my second summer attempting the list and I admit that this year I've needed extra motivation to hike the seemingly identical, pine-scented trails of Maine and New Hampshire. What better motivation than tales of other adventurers on far more harrowing and aspirational journeys than my own?

Enter Jon Krakauer. I had watched him as a talking head in various climbing documentaries but had never read his books. Like a good reader-cum-hiker, I bought used paperback copies of both Into the Wild and Into Thin Air, threw them in my frame pack, and headed into the woods.

After summiting five 4,000-footers in a day, I wanted nothing more than to heat up some (absolutely delicious and well-earned) beef stew, coat my legs with tiger balm, and dive into my sleeping bag to start Into Thin Air. Remembering that Into Thin Air is autobiographical was somehow important. "Perhaps someday I, too, could write about an epic adventure," I thought, slathering more tiger balm onto my legs.

The story unfolds like this: Krakauer and his editors think it would be a great idea for him to join an adventure tourism company's expedition to the summit of Everest. What could be better than a story about able-bodied men and women from various walks of life joining forces with experienced guides to tackle the climb of a lifetime?

Many in the group turn out not to be professional climbers, but all have the cash to afford the roughly $60k the vacation costs, a fact the worries Krakauer at first. Nevertheless, he learns to respect the majority of his comrades. As they struggle with altitude sickness and frostbite, we readers feel close to almost all of them (except perhaps the wealthy socialite with personal sherpas to carry her stacks of fashion magazines). Climbing ability aside, the guides were confident and experienced, and all seems well until Summit Day.

With Krakauer setting the stage for impending disaster with various facts from the mountain's storied history, we readers are left with a pretty obvious conclusion before the events of Summit Day unfold: very few people are qualified to climb one of the toughest mountains in the world. At the risk of ruining the book for the few of you unfamiliar with the story, many in the group end up dying, including several truly heroic guides and patrons. Krakauer helps us understand what went wrong. Although many patrons had questionable climbing ability, Krakauer does an excellent job of not placing blame on anybody, really: not the guides, not the companies involved, and not the climbers who paid for the adventure of a lifetime. A series of factors snowballed, the weather wasn't great, and some mistakes were made.

If nothing else, Into Thin Air is a wonderful deterrent for anyone who fancies him or herself an adventurer capable of such an extreme climb. Between the same meals for months and the loss of toenails and lives, summiting Everest is not for the faint of heart. The redundancy and discomfort of daily life on the mountain is less than alluring:

Above the comforts of Base Camp, the expedition in fact became an almost Calvinistic undertaking. The ratio of misery to pleasure was greater by an order of magnitude than any mountain I'd been on; I quickly came to understand that climbing Everest was primarily about enduring pain. And in subjecting ourselves to week after week of toil, tedium and suffering, it struck me that most of us were probably seeking above all else, something like a state of grace.

Base camp, maybe, but summiting Everest is not in my future. Other adventures certainly are and my wanderlust often puts me at odds with my more practical friends and family. Constantly tackling peaks, book stacks, new countries, and new languages, they can't (and don't want to) keep up. Hearing about these pursuits strikes a chord with most people: you are either inspired by my ambition or, more often, exhausted by thinking about it. My family largely falls into the latter category.

Two years ago, I watched the documentary version of Into the Wild and felt more emotions than I can adequately describe: inspiration, sadness, anger, camaraderie. Not able to finish it on my hike, I cracked open the book Into the Wild on a recent flight to Beijing to take a deeper dive into a story that has haunted me since I watched the film and, more importantly, to help me wrestle with my conflicted emotions on wanderlust.

The story boils down to a recent college graduate, Chris McCandless, eschewing law school, his parents' suburban lifestyle, and most societal norms by donating his savings to Oxfam, abandoning his possessions, and hitting the road. He leaves a strong impression on everyone he meets along the way, but makes zero contact with his family--including his beloved sister--for several years. His adventures are numerous: he works on a farm, kayaks to Mexico, and lives in Slab City. It's basically On the Road or any coming of age travel story, but with more Tolstoy, less sex, and an ending none of us wants: death by starvation (probably) in the Alaskan wilderness.

The book sends readers oscillating from awe for McCandless' bravery and idealism, to anger toward every stupid 20-something who thinks he knows everything. Your parents made some mistakes? So did mine. Unlike McCandless, the thought of breaking ties with my family until the day I turn up dead in a bus in the Alaskan bush hits me hard in the chest. How could I have walked down so many dark alleys in Corsica at 17? Did I call my mom enough when I drove across the country at 19? Here was a man with a wanderlust similar to my own but lacking something I have in spades: empathy for my family.

However distant his views on family are from mine, McCandless' guiding ethos feels unsettlingly familiar. In a letter to a friend he meets on his travels, his extolls the virtues of his chosen lifestyle:

Don't settle down and sit in one place. Move around, be nomadic, make each day a new horizon. You are still going to live a long time, Ron, and it would be a shame if you did not take the opportunity to revolutionize your life and move into an entirely new realm of experience.

Like McCandless, I feel an attraction to the unknown, a drive to explore every nook and cranny in this vast universe. I have yet to turn up dead in the wilderness, but my treks across continents have surely kept my mother awake at night. She worries whether I'm in the woods of northern Maine or cities across the globe. Unlike McCandless, however, I always call home.

Inspired by this post? Support The Indent by buying copies of these books using the Amazon affiliate links below.

The Indent: Book Reviews from a Mega-Reader Newsletter

Join the newsletter to receive the latest updates in your inbox.

If you are like me—and based on how search algorithms work, you probably are a little bit like me—you may not know Iron Maiden from Megadeath. Let's just assume that 80s metal is an amorphous blob or guitar noises, bright lights, and smoke machines in your brain. You

Book Review: The Fish That Ate the Whale: The Life and Times of America's Banana King by Rich Cohen
Paid Members Public

Bananas, it turns out, don't grow on trees, but instead are large herbs and are best classified as berries. The plant, which is actually a tall grass, can grow - from a cutting and not a seed - twenty inches in twenty-four hours. The banana we eat in the United

The Indent: Book Reviews from a Mega-Reader Newsletter

Join the newsletter to receive the latest updates in your inbox.